Vietnam is such a country where eating touches every aspect of life. Get ready for a food road map for exploring this country’s history, culture, and soul. With an increase in international tourists and travelers,

Vietnam is such a country where eating touches every aspect of life. Get ready for a food road map for exploring this country’s history, culture, and soul. With an increase in international tourists and travelers, Vietnam is slowly becoming the number one in culinary and adventure travel. Located on the eastern side of the Indochinese peninsula, Vietnam is a goldmine in terms of culture, with China to the north, Laos, Cambodia to the west, and the East Sea in the Pacific Ocean. This country is where food and travel go hand in hand, making most tourists look beyond the standard luxury destinations and accommodations. Vietnamese Cuisine is growing in popularity as many restaurants worldwide are opening with their versions of the unique dishes derived from locals like Hoi An Hue and Hanoi. Even if these destinations each have their own cultures and traditions concerning the local Cuisine as each of the dishes provide a part of Vietnam’s culture and heritage.

Healthiest Cuisines in the World

Vietnamese Cuisine is considered to be one of the healthiest Cuisine from around the world. To each Cuisine, there is one part of history that makes it excellent when having it. In this way, Vietnamese Cuisine has five elements known to balance each meal that this great country has to serve. Most Vietnamese dishes include five fundamental senses: spicy, sour, bitter, salty, and sweet, which correspond to the five organs; gall bladder, small intestine, large intestine, stomach, and urinary bladder. Gastronomes appeal to Vietnamese dishes. A different food arrangement attracts the eyes, sounds that come from a crisp ingredient; the tongue detects the five spices as for the aromatic ingredients are seen by the nose. Some meals are felt by the fingers, which is perceived as touching. Vietnamese Cuisine is not only about food and spices. It is also about the Yin-Yang balance applied in composing a meal that assembles a healthy balance for the body.

In Vietnam, there are dishes that you will get according to their seasons to provide different contrast in temperature and spiciness of the food and the environment in which you have the food. For example; 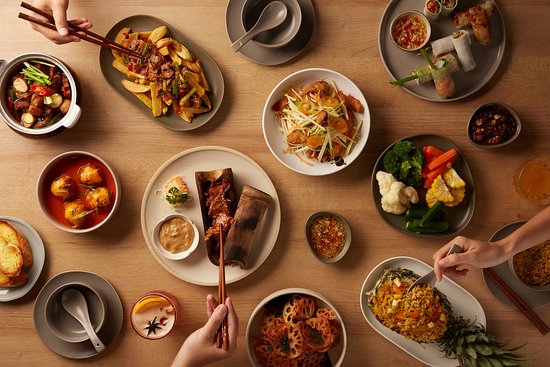 Talking about Vietnamese Cuisine and not mentioning the French colonization is hard, which started with the missionaries’ arrival in the 18th century and not ending until 1954. The French colonization impacted the country, and some glimpses of it are still to be seen in architecture, the land, and the flavors. The most apparent food typically French is the Banh Mi, the crusty French baguettes with a Vietnamese version with grilled pork, fish patties, sardines, cilantro, pickled chili carrots, and other different fillings. Pho is another example of the French colonization that left its mark – the soup is a blend of Vietnamese rice noodles and French like broths. There is a theory that the word pho has a phonetic imitation of the French word feu (fire), which translates to pot au feu.

In the Vietnamese culture, salt is used as a connection between the world of the living and the dead. The dessert Bánh Phu thê is known as the husband and wife cake made from rice with mung bean stuffing wrapped in a box of pandan leaves. The suitor traditionally gives this dessert, but it is mostly found in all banquets with modernization. The food is also placed at the ancestral altar as an offering to the dead on special occasions like the Lunar New Year. Cooking and eating are an essential part of Vietnamese culture. The word ăn is included in several sayings and has an extensive range of semantic extensions.

Watch out for the next part of this blog to talk about the regional variations in Vietnamese Cuisine.